Why You Should Learn to Love Running 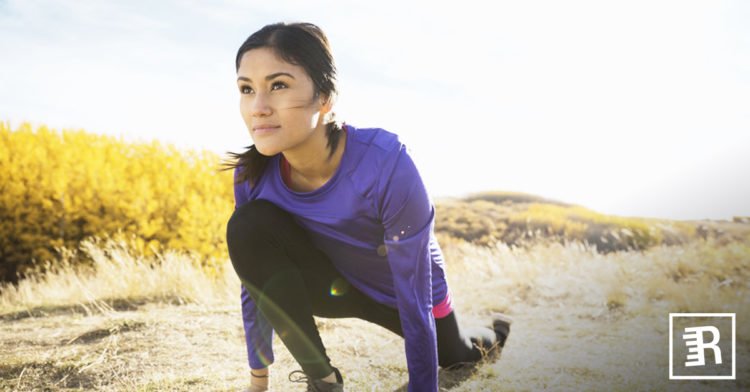 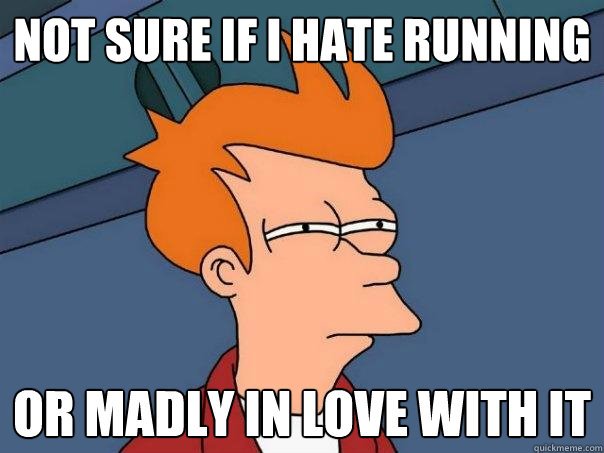 Do you find running to be like marmite? Do you love it or hate it? Love is a strong word and to you, it may sound wrong putting in the same sentence as ‘running’. However there are some valid reasons behind why you should love or at least like this physical activity.

Whether you want to learn to run or are now into the running groove, its only logical to want to enjoy what you are doing. You know it’s good for you, you know its making you fitter and healthier (blah blah blah) but do you really know the full extent of it? If you knew, we are sure you would increase your love for running and so you won't resonate with the image below. 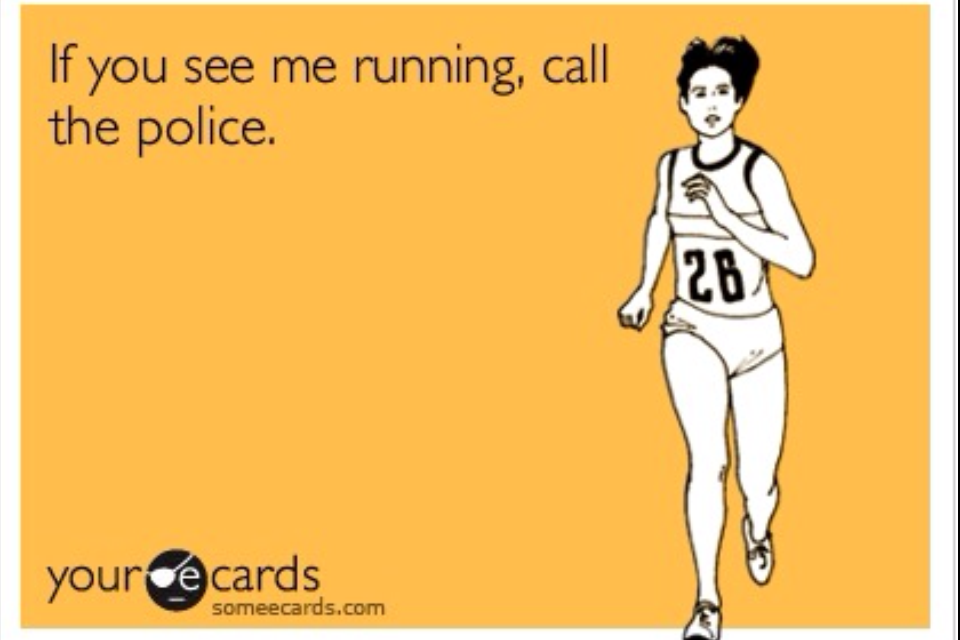 If you are one of those runners who hate the thought of running but perseveres anyway, this article may convince you otherwise.

To relate my personal journey, it was only when I got through the breathiness, aches and came out the other side I learnt there was a whole other side to running. It wasn’t an instantaneous thing but something that developed as I became better and started to gain loyal running buddies.

Running is much more than a workout 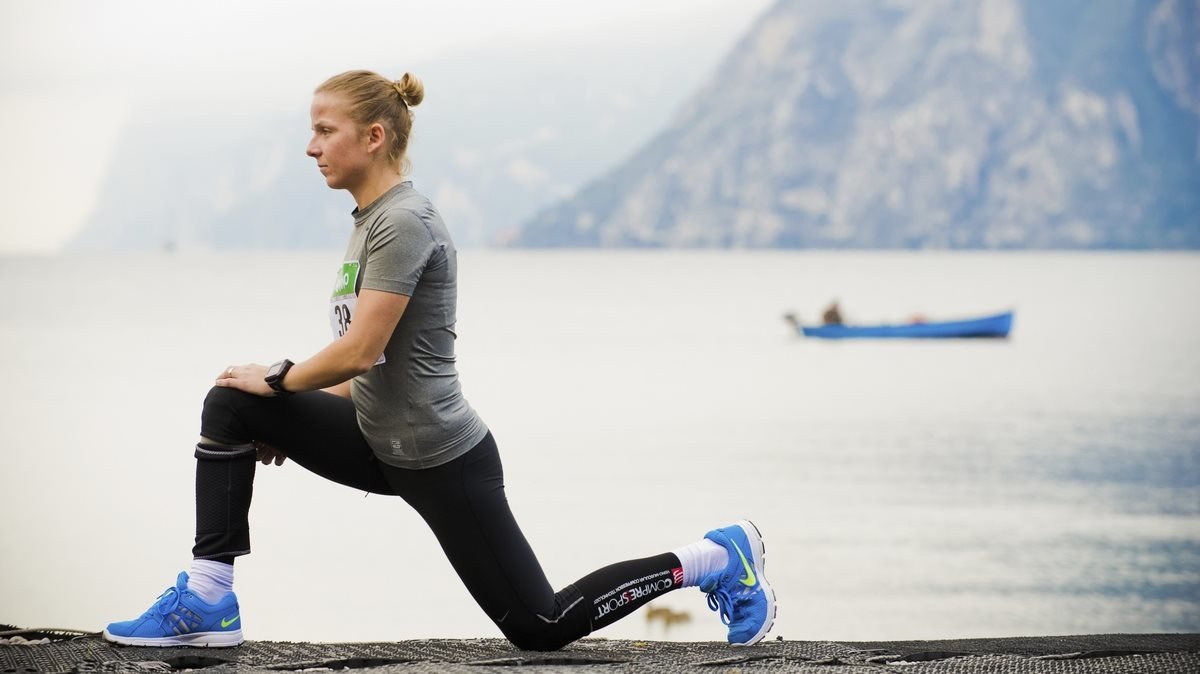 Looking for reasons to love the activity? Unlike other sports, running gives you a chance to unplug and run free whilst soaking up the great outdoors. In the woods, parks, city streets, along peaceful canals as the sun slips through the trees, beside white sandy beaches – you name a place and you bet you can take your feet there.

Running gives you the unique opportunity to find peace in a loud, busy world. Your mind can become quiet as you get in-tune with your body, the motion and find your rhythm.

Some would even say once they get good, running helps quiet their mind. They run after a stressful day to release negative energy and quiet boisterous thoughts. Time and time again I have done it and felt so much better! Also starting the day with a run is like a natural form of coffee to get you going for the day.

No interruptions. No monthly fees. You don’t have to be a crazy dedicated athlete to do it well. When you really think about it, there are many more reasons to love running then to hate it.

But we guess some more of you need a bit more convincing then that right? If you answered yes then keep reading…

How beneficial running really is… 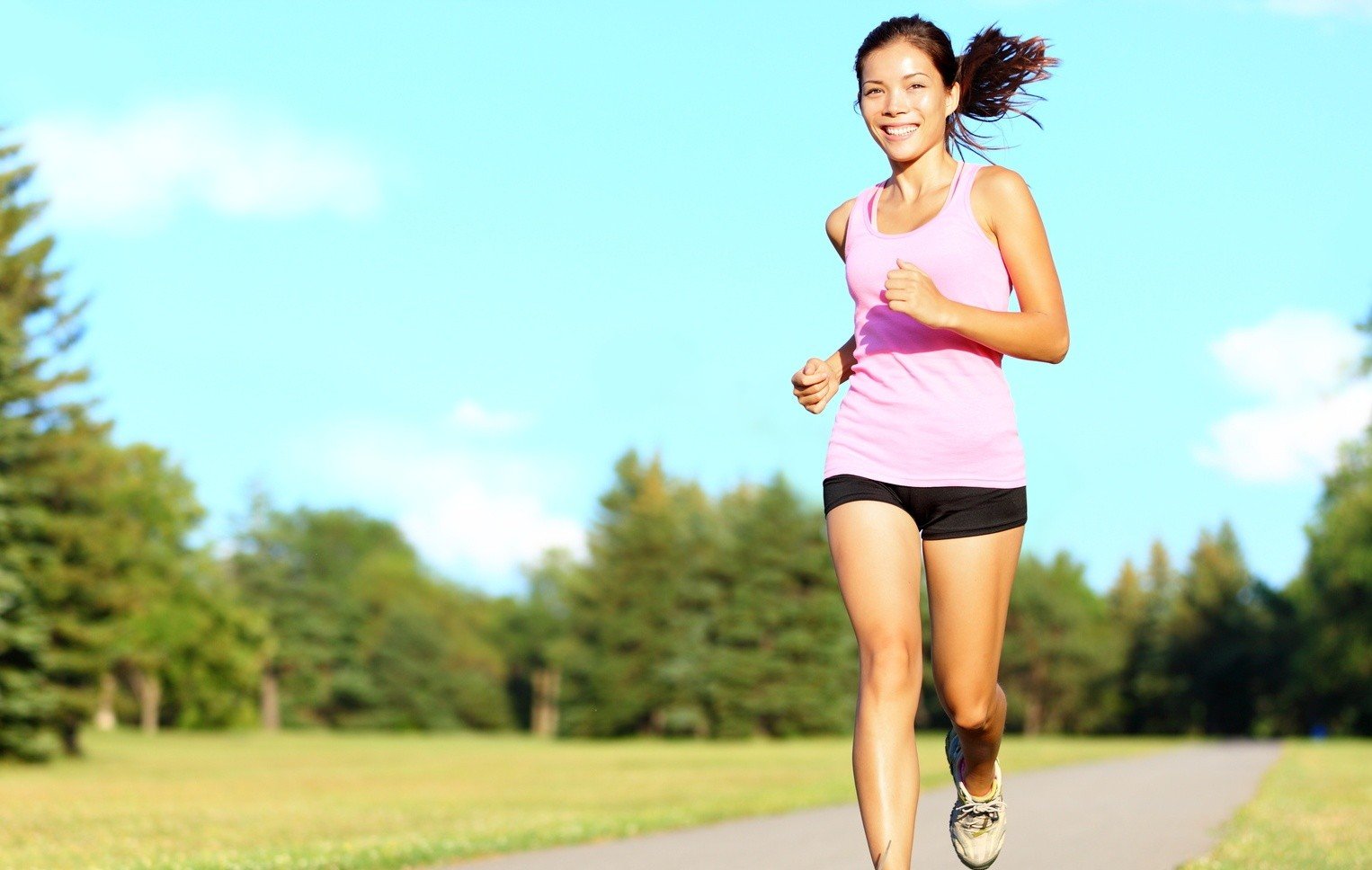 As soon as you discover some of the big benefits there are to running regularly, it will be easier to develop a liking for it. Did you know for example there’s a strong correlation between exercise and mood? Professor of Psychology, Michael Otto, who lectures at Boston University states ‘usually within five minutes after moderate exercise you get a mood-enhancement effect’. Here are some other general reasons:

So essentially, running can change your body on a psychological, physical and emotional level which has a positive impact on the quality of your life. If that’s not a good enough reason to learn to enjoy running; we don’t know what is!

What not to do

You don’t want to jump into things too quickly or expect amazing results in a short space of time. Even those you think have a body ‘built for running’ still need to ease into things and get their body used to the activity. There’s a common misbelief that you’re either a good runner or you’re not. The truth is the vast majority who learn to run can exceed their expectations if they maintain a steady routine and set realistic goals.

The Center of Disease and Control Prevention state that adults need 75 minutes of vigorous aerobic activities weekly such as jogging and running to see important health benefits. Now no one is asking you to do 75 minutes in your first month which is why it’s vital to start small. Ten minutes a time is fine and if you build that up till you reach 30 minutes per session, you’ll hit the 75 mark in no time!

There are some great training routines out there which work wonders to developing your stamina and skill. This regime for example starts with a simple 1 minute jogging and 4 minutes walking. Then repeating this set 5 times in your first session.

Alternatively, you may want to take a fast track approach with a 4 week plan when you learn to run. At the end of the day you want to feel whatever feels comfortable to you yet pushes you gently to improve.

Benefits of running to inspire the love! 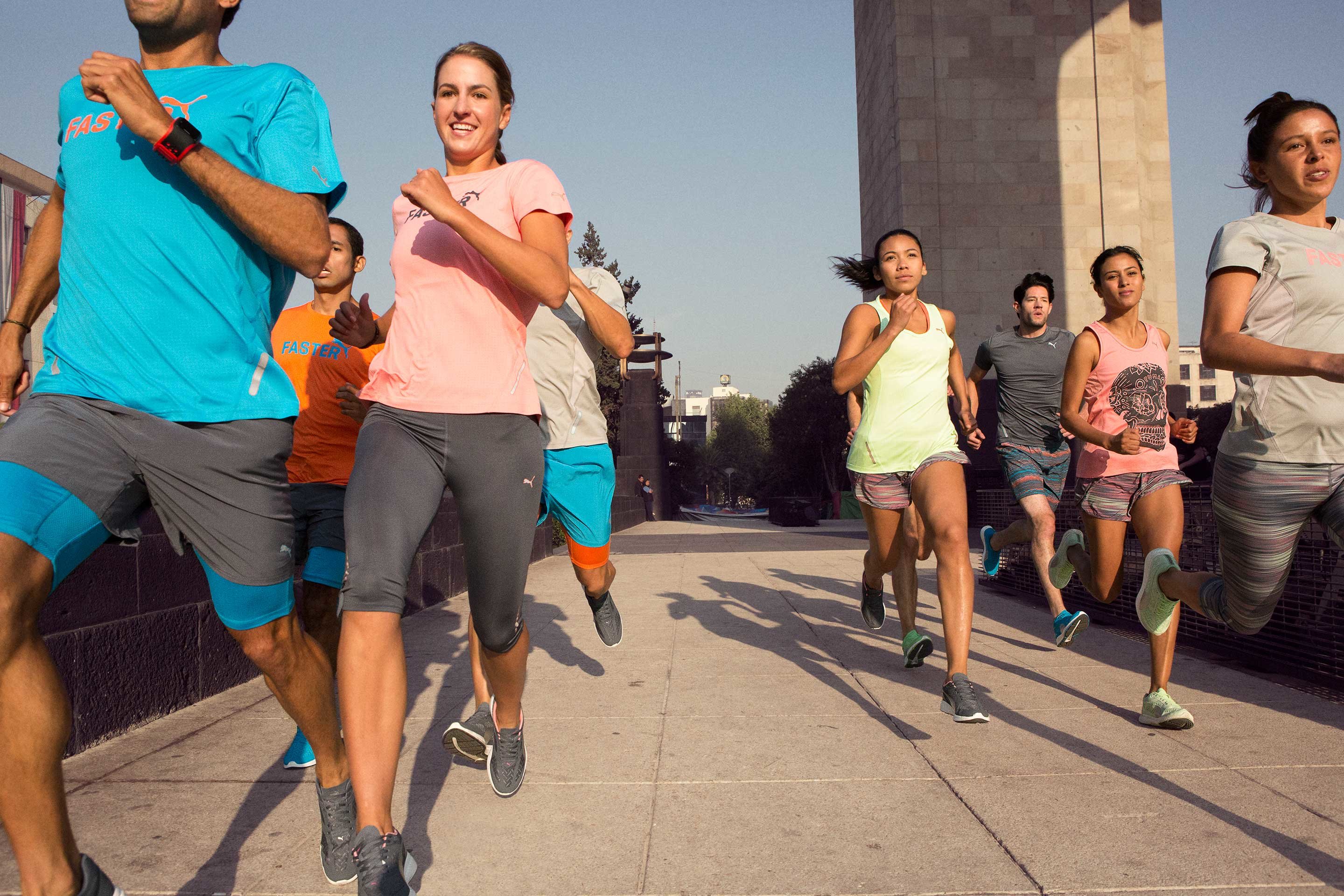 Can running make you happier, even when you dislike it? Learn to run, just give it a go and see for yourself! If you’ve already gotten into a good gym routine you’ll know the difference between how you feel before starting and how you feel when you’ve finished.

Feel good hormones such as endocannabinoids increase when running to lift the mood! Jogging was listed as an activity that can help fight depression and is known to alleviate anxiety due to the release of endorphins.

2. A light jog can improve your sleep 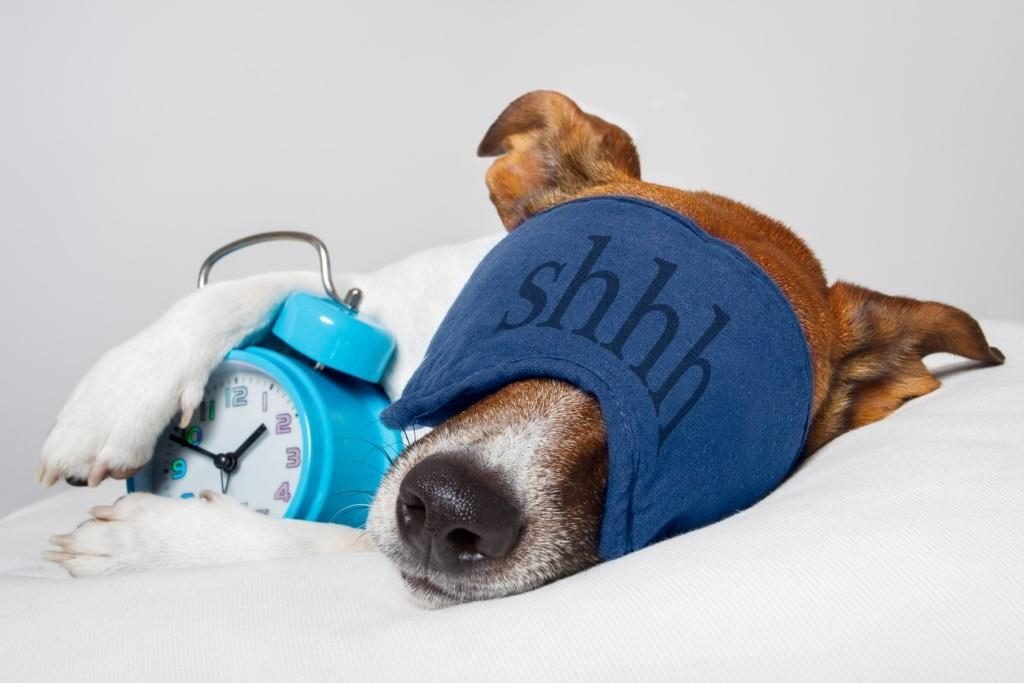 The sleep foundation looked into a number of studies to discover when people exercise it significantly benefits the sleep of chronic insomniacs. This is especially the case with moderate intensity workouts such as brisk walking or light jogging. So if you’ve been struggling to get some shut eye recently, it could help incorporating some jogging into your weekly regime.

This is an obvious one but we thought we’d remind you of the extent it positively impacts your fitness. Not only do you burn calories whilst you’re running but after you stop – you continue to burn! This after-burn is otherwise known as the EPOC effect (exercise post oxygen consumption).

To boost this after-burn effect,  try mix in some interval training when you build confidence in your running. High intensity interval training (HIIT) is the most effective way to stimulate the EPOC effect according to Health and Fitness expert Pete Mcall.

After you have got into a steady routine, try picking up the pace. Challenge not only makes your workout more fun and rewarding but boosts the benefits. When you’re ready, try adding 7 sets of 20 second sprints into a 20 minute run.

Another interesting bit of research was published in The Nursing Times which included 86 participants split into two groups. One group was focused on aerobic training and the other on resistance.  In the course of two weeks, the aerobic training group had demonstrated significant increase in balance, mobility and cardio. This was just with two sessions every week! 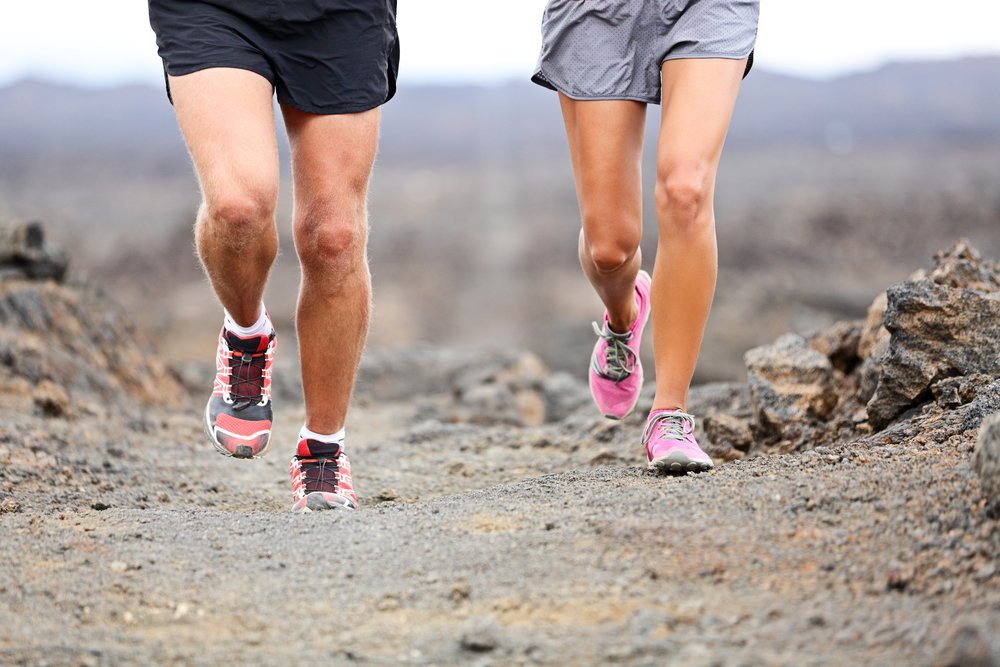 The weakening of our bones as we age is not as inevitable as some may think. When we learn to run properly and regularly, we can prevent this part of the aging process by stimulating our muscles and joints thus keeping them strong. An article published by New York Times also relates how high impact exercise is good for increasing bone mass.

Another cool piece of research was a study at the University of Missouri who compared the bone density runners to cyclists. They discovered the group of cyclists had 63% with low hip and spine bone density whereas there were only 19% in the running group. 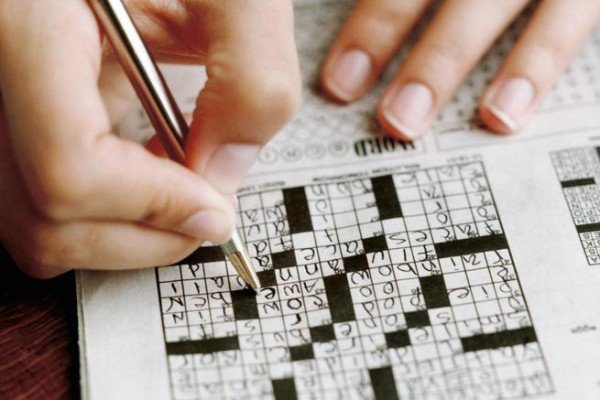 Ever read that our brain starts shrinking by the time we hit 30? Then more when we hit 35? Then even more when we hit 40 and so on?! We don’t want to be kill-joys though so have come bearing good news! Running in fact prolongs age-related mental decline if not combats it keeping functions such as working memory, task switching and attention sharp.  The simple act of running creases blood flow to the brain so more oxygen and nutrients can flow.

Studies also show that older adults who had kept up a consistent regime of fitness got higher scores on mental tests then their peers. Interestingly, this is the same for Stroke patients who exercised regularly. Research saw major improvements in their general brain function from performing tasks involving planning, concentration, organization and attention. 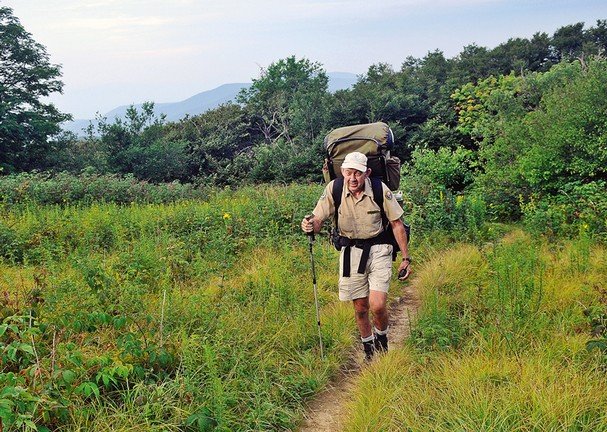 My neighbor is living proof of this. Within his late seventies he still runs, swims and probably engages in more physical activity than me! As sharp as a tack, I see him pacing the streets every other day with his running gear on, hunched over slightly but nonetheless still going strong.

No doubt you will know individuals with a similar story who have kept a consistent fitness regime up. You’ll notice as you begin to compare how alert, mobile, healthy and able these elderly people are, you probably wouldn’t even class them as elderly!

A sizable study was published PLOS Medicine which showed that even when people exercised for the absolute minimum (30 minutes x 5 weekly), you can still add years onto your life. People who smoked gained 4.1 years, people who didn’t gained 3, people who’d combated cancer gained 5.3 years.

Another interesting find was by the University of British Columbia who discovered that premature death had been reduced by those who ran 2 miles daily by 20-50%! Those numbers are astonishing yet prove just how powerful running can be. 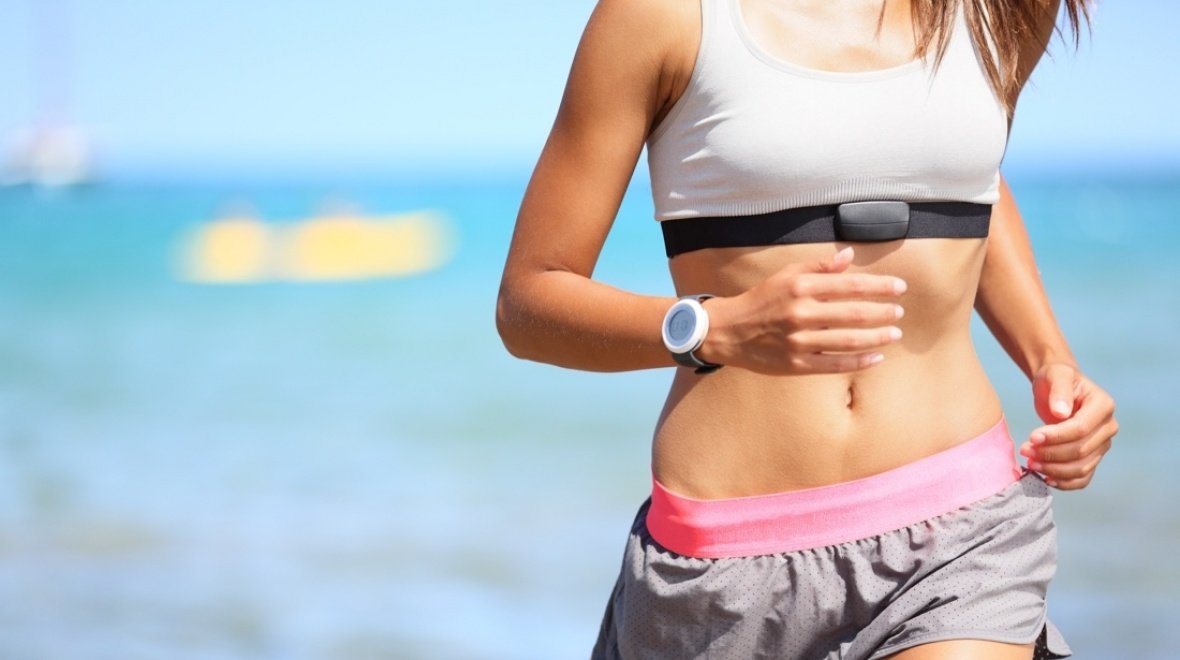 If you want a sure-fire way to improve your cardiac health, you’ve found it in running. Running regularly can help maintain heart heath by reducing the bad cholesterol and increasing the good cholesterol. A knock-on benefit is that it also lowers blood pressure which contributes to a healthy heart.

Research published in the American Journal of Cardiology discovered 45% of runners had less risk of suffering from heart disease.

8. Great for shedding the pounds 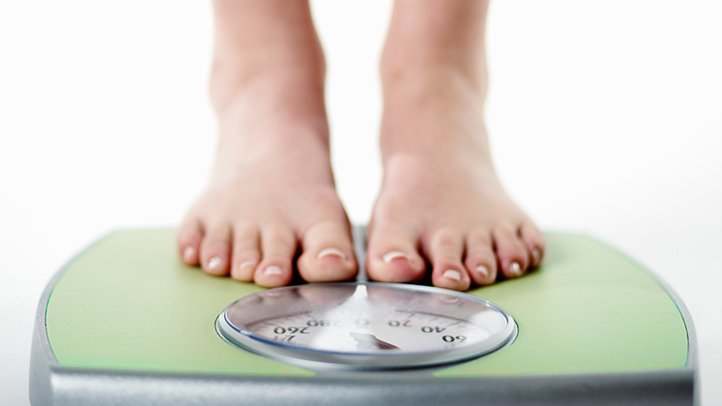 Running is highly effective for losing weight. Did you know that for every 10 miles you run you’ll burn 1000 calories? Sounds good right? If you alter your diet and combine this with a steady running routine, you should see results in a reasonable time.

All you need to do is a calorie deficit (burn more calories than you eat daily) to ramp up the weight loss. A few other suggestions weight loss expert Dr Klauer said to boost weight loss was to: 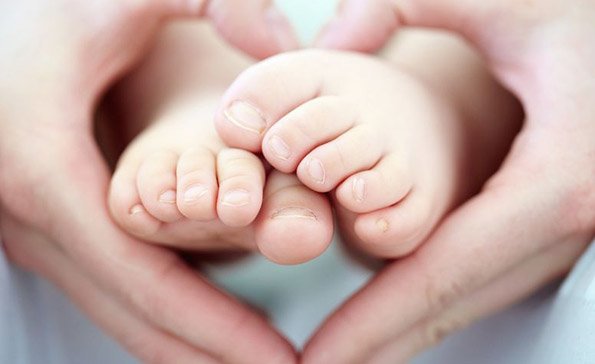 Some studies have shown there is a correlation between exercise (running in particular) and an improvement in reproductive health. A study published in Obstetrics & Gynecology noted that females who exercised 30 minutes every day reduced risk of becoming infertile from ovulation problems.

On the contrary though, over-exercise can cause lowered fertility. So strike the right balance with your running and who knows. Experts say the ideal amount of exercise to be getting weekly to boost fertility is 150 minutes. 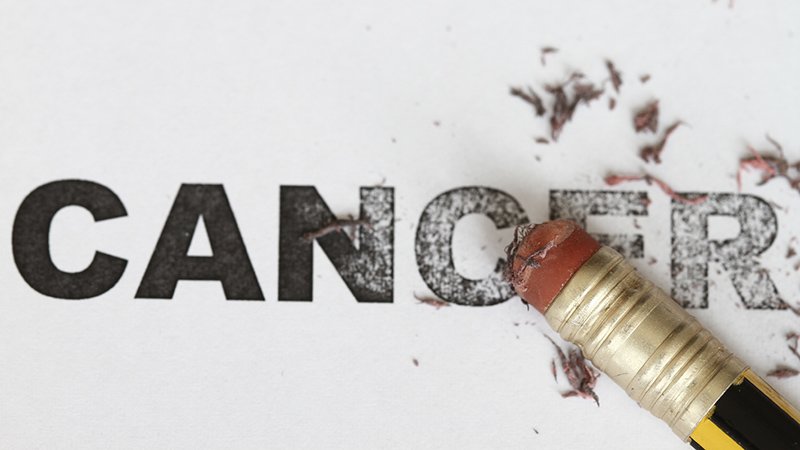 A new study sheds light on the protective power of running and physical activity warding off dangerous cancer cells. The research was carried out on 1.44 million people from age 19-98 in the US and EU.

Due to the size of the study a large number of cancers were examined and people were followed for 11 years in which 187,000 new cancers occurred. They discovered that leisure-time physical activity was associated with lower risk of colon, breast, endometrial cancers and 10 additional cancers!

So grab a pair of decent running shoes, get your playlist lined up and get ready to hit the streets!