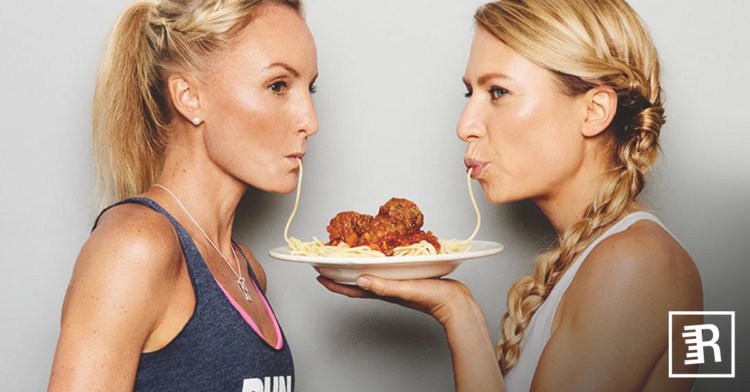 “Outside of training the single greatest thing an athlete can do to improve their performance (and their long-term health and happiness) is to learn to cook. ”

The up and coming book Run Fast Eat Slow by Shalane Flanagan and Elyse Kopecky shatters previous understanding of what it means to eat as a runner. Many runners live off the calorie rule, but there is a new way of eating that will have you feeling healthier than you ever have before.

How the Story Began

Elyse and Shalane began their journey training together at University of North Carolina on the cross-country team. They followed the pattern of an athlete diet with occasional cooking of flavorful food, while other athletes continued with the cold cereal and pop-tart diet.

After college, Shalane was recruited to be a runner for Nike, while Elyse worked for Nike as a digital marketing producer. Residing in Portland, OR, they both continued their passions, until Elyse felt the need for a change after traveling abroad. With a passionate heart, she set forward to discover recipes for healthy running, while Shalane continued on as a World Championship marathoner and a USA Olympic Athlete.

The Need For a Cultural Shift

The mass misunderstanding of athlete nutrition has become a problem. With a high rate of women athlete infertility due to amenorrhea, Elyse and Shalane believe that athletes are missing important nutrition in their diets that may help with common runner issues. Elyse suffered with amenorrhea for fifteen years until she made the discovery to change her nutritional value. Once adding needed fats back into her diet, she was able to become a mother to a healthy baby girl.

When Elyse returned to Portland, she reunited with Shalane for dinner. They both acknowledged the need to share their knowledge as runners and chefs in a book to help counter previous cultural understanding. “Lean and light” no longer works for the average runner. Going back to the roots of cooking by creating recipes made from scratch, Elyse and Shalane open a new understanding of staying healthy as a runner.

Leading up to Shalane's run at the Berlin Marathon, they kept a food journal that soon led to the perfection of over 100 recipes. Tested and approved by an array of runners, each recipe provides a flavor impact that counters inflammation, toxins, and digestive issues.

A Story of Recipes that Empower

Elyse and Shalane bring passion and knowledge to each recipe in Run Fast Eat Slow. Food styles range from the quaint streets of Europe, to the open fields of Africa, and across to the flavors of Asia. Each recipe gives a boost to your daily run and empowers you to be a healthier runner.

The recipes are designed for the fast paced life, as well as the informed chef. Detailed instructions show you how to cook from scratch with ingredients that give you the nutrients you have been missing.

“Ever since I started tackling longer distances, I began to realize what an important role nutrition plays in my performance. It’s literally just as important as sleep, or the amount of time I put into my running. Eating healthy helps me recover, makes me happy and enhances my overall training.”

What People Are Saying

Run Fast Eat Slow will shift the way you eat, and the way you train. With balanced nutrition, your body will be able to recover faster, run longer, and breathe easier. Highly recommended by record holding athletes, you can discover for yourself how much one recipe book can guide you to healthier living, and better running.

Shalane and Elyse have given you the opportunity to empower yourself as a runner. We highly recommend this book to you, because the meals work for the every day runner to the Olympic athlete. The recipes allow for you to keep the same pace of life, just with a little more nutritional impact.

The whole-food recipes have proven effectiveness with Shalane's training program, which have now led her to the 2016 Rio Olympics for her fourth time in the Olympic Games. With easy to do recipes that allow for you to keep your same pace of life, Run Fast Eat Slow is a book for every type of runner.

Discover the up and coming book Run Fast Eat Slow for yourself at runfasteatslow.com